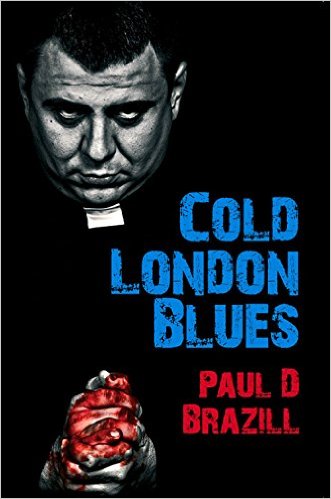 I know: you’ll be shocked to hear that I loved this. I’ve been champing the bit waiting for this book to drop because there are few writers who genuinely entertain as much as Brazill. And this is no exception.

If you’ve read Guns of Brixton, you’ll recognise some of the folks here. The tune has changed from the Clash to the inimitable Vic Godard and this offers the chance to slip in a little — dare I say it? — poetry between the mayhem. There’s a confidence here that allows some audacity. The first line: ‘The morning that Father Tim Cook killed Aldo Calvino the air tasted like lead and the sky was gun-metal grey.’ Mood and mayhem plonk down on a bar stool next to you. You’re not going anywhere until you find out how it all shakes out.

As always it’s laugh out loud funny between bouts of wincingly painful chaos brought on by characters who are as unlikely as they are vivid: gangsters who are feeling their age, hitmen who miss, hoods who want to go straight, and an actor so far up his own arse he thinks he’s god — or maybe just Batman.

I love the expansion of the Brazill world: both the London stories and the Seatown tales feed into the history of Cold London Blues. You don’t need to have read all his other books but it helps. There’s a mad world of lowlifes, cops and random walk-ons — no innocents though. Everyone has their demons — but they’ve got music too.

And I love the idea of the Roman Dalton P.I. series: TV people, make it so!

Some quotes (I’ll try not to post everything): just go buy it now.

A face so lived-in squatters wouldn’t stay there, as his old gran would have said.

Tim wasn’t sure when it was that domestic drudgery like cooking and gardening had become elevated to the level of the works of Beethoven and Chaucer but it was another sign of what was wrong with the modern world, the country.

‘Consistency is the city hobgoblin of little minds.’

‘If you gaze into the abyss’ said Marty, with a lop-sided smirk. ‘The abyss also gazes … and sometimes winks at you and blows you a kiss.’

A murder of crows scattered and sliced across the white moon, as the purr of an approaching Mercedes grew to a roar.

Marty hated high places. He got vertigo in thick socks.