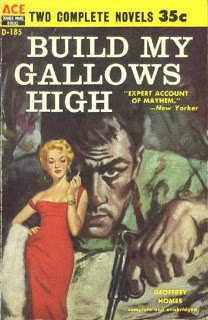 Probably best known as the text for Out of the Past, the classic noir film with Robert Mitchum, Jane Greer and Kirk Douglas (and how much better a title is the book than that?), this novel written under a pseudonym by screenwriter Daniel Mainwaring, who also worked on the script for Invasion of the Body Snatchers and dozens of others, has much less cultural currency than the film it led to (I’d forgotten Against All Odds was a remake: I just cringe automatically on hearing in my head the Phil Collins theme song).

It’s a tight little book that feels very much like an adapted screenplay. There’s no wasted words in this slim volume though it fleshes out the backstory of the novel quite a bit more. The action pretty much hurls through the events non-stop. Nonetheless Homes/Mainwaring offers some moments worth lingering over, throwing in scraps of poetry (‘When I am dead and over me bright April shakes down her rain-drenched hair’) and some description that offers a bit of poetry of its own:

Lloyd Eels was a tall man who hadn’t come off the assembly line.Somebody had found some spare parts lying around and had put them together carelessly, not bothering to get the bolts tight so that they seemed almost ready to come apart. He had black, sad eyes and a black mustache like an untrimmed hedge. No amount of combing would help his shock of hair.

‘You’re getting fat,’ Red said. ‘It doesn’t become you.’
‘You come up here to tell me that?’
‘No, I hate to see a man let himself go. They’ll get you back in shape in Alcatraz.’
‘Always the jester,’ Whit said acidly.
‘But the cap is getting pretty shabby and the bells lose their merry tinkle.’

Jim Caldwell’s eyes saw nothing in the drab domestic scene to wonder at, nothing to make him consider even momentarily the thought that people got old and people took each other for granted and presently there was no magic in the world. Jesus, she was beautiful standing under the hard, white light, her head tilted a little, her cheeks flushed, her dark eyes full of stars.

See all the overlooked books over at Patti’s blog.