Back in 1980, my modern British literature course at Regents College introduced me to Alan Sillitoe, forever giving me a Northern bias, I think. I re-read this on the train to London and found it just as compelling as ever, though I think age adds at least a little empathy that I didn’t feel back then. When you’re 18 it reads like a tragedy: they’ll grind you down eventually, those bastards. From the perspective of age, you realise eventually you want more than perpetually kicking against the pricks: you want to win. So you find other ways to fight.

Or so I tell myself.

I could quote endlessly from this book: Sillitoe has a sharp observant eye. There’s little in the way of showing off here, he just says everything right and from a perspective that’s spot on, though there’s a soaring beauty to his descriptions of everything from the run down neighbourhoods to the cacophony of the factory. The opening paragraph of Arthur’s drunken fall down the stairs is hard to top, but that’s only the beginning of course. He’s lies not out of habit but out of a desire to reshape reality according to his whimsy. ‘It’s a hard life if you don’t weaken’ but his only attack is wringing the most he can from the system that exists. ‘Liars don’t prosper’ his lover warns him, but Arthur is determined to prove that they do.

‘With the wages you got you could save up for a motor-bike or even an old car, or you could go on a ten-day binge and get rid of all you’d saved. Because it was no use saving your money year after year. A mug’s game, since the value of it got less and less and in any case you never knew when the Yanks were going to do something daft like dropping the H-bomb on Moscow.’

‘Make a woman enjoy being in bed with you–that’s a big part of the battle–then you were well on your way to keeping her with you for good.’

‘The more he talked the less he noticed the noise, and they sat in a magic ring of quiet speech that no disturbance could enter.’

‘Not that he minded them drinking his stout. He expected it from Nottingham women who, he told himself, were cheeky-daft, and thought so much of themselves that they would drink your ale whether they liked your company or not.’

Check out all the neglected reads at Patti Abbott’s blog. 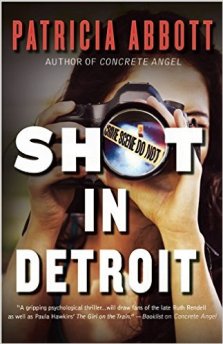 I’m happy to host Patti Abbott today to talk a little bit about the writing process behind her second novel SHOT IN DETROIT. The book has been generating a lot of buzz, building on the fine reputation of CONCRETE ANGEL.

BLURB: Violet Hart is a photographer who has always returned to cobble out a life for herself in the oddly womblike interiors of Detroit. Nearing forty, she’s keenly aware that the time for artistic recognition is running out. When her lover, Bill, a Detroit mortician, needs a photograph of a body, she agrees to takes the picture. It’s an artistic success and Violet is energized by the subject matter, persuading Bill to allow her to take pictures of some of his other “clients,” eventually settling on photographing young, black men.

When Violet’s new portfolio is launched, she quickly strikes a deal, agreeing to produce a dozen pictures with a short deadline, confident because dead bodies are commonplace in Detroit and she has access to the city’s most prominent mortician. These demands soon place Violet in the position of having to strain to meet her quota.

As time runs out, how will Violet come up with enough subjects to photograph without losing her soul or her life in the process? A riveting novel of psychological suspense, Patricia Abbott continues to cement herself as one of our very best writers of the darkness that lies within the human heart

Do you consider genre when you write? Did you write SHOT IN DETROIT as a crime novel? How about CONCRETE ANGEL?

I lack calculation, or perhaps better phrased as control, which is probably a bad thing for someone trying to find success in writing. I am a pantser rather than a planner. And when I sent Shot out for the first time (it was initially titled Raising the Dead) the very kind editor who agreed to read it, said, “My God, woman, forty pages have gone by without a body?” This was from Hard Case Crime and I clearly did not understand the demands of that genre. The body count in the their books is high and the bodies fall quickly. I should have been aware of it after reading many of their books. I should have calculated or exercised control over what I needed to succeed with them. But instead I went merrily along writing the book that I seemed to only work out on a subconscious level.

And as someone who does little planning or outlining, I also never think, “Hey, it’s time for another murder.” It may happen, but I never planned it. I am as surprised as a reader might be when it does, wondering when my character came up with that idea. When did he get so angry?

Getting back to the question of genre, when and how does a story find its way into genre fiction? If there is any murder at all in a novel, is it then crime fiction? Well, that would widen the gates considerably. We’d have to usher in TO KILL A MOCKINGBIRD, THE DIARY OF ANNE FRANK, CRIME AND PUNISHMENT, THERESE RAQUIN. I would instead say that crime cannot be incidental to the plot in genre fiction. It has to be the focus of it. What we are most interested in, maybe even to the diminishment of character.

With Mr. Ardai’s critique in mind, I decided to begin the second novel, CONCRETE ANGEL, with a murder. But it’s a bit of a cheat because Eve Moran is not your typical murderer, and her first and only murder was an accident. But throughout the book she engages in most other crimes. A crime novel? I was not sure and called it domestic suspense. In many ways, her crimes are the result of mental illness. And if I was able to control or even outline a novel, I probably would have added another murder along the way. Her father might have made a good victim. Her husband?

Shot in Detroit veers even further from the definition of genre. We are not much interested in who killed the people who die in the book. Hopefully we are interested instead in what being around murder or death, in even being invested in it as a photographer, does to a woman like Violet Hart. How it both softens and hardens her over six months. But if twelve men die, it can rest easily on the shelves of crime fiction for me.

So have I written two genre novels? Are both crime novels? I would say yes.

Visit Patti’s blog for all kinds of interesting discussion, including her weekly round-up of Friday’s Forgotten Books.

After some rather considerable postal shenanigans, the pledge pins arrived via FedEx so I could hand them out to all and sundry. It was a hoot to see folks wearing ‘I’m pledging Sigma Tau Nu’ badges — even the gals at the Twisted Mango!

Thomas Pluck made sure that the word was out about Protectors 2: Heroes. Posters and flyers in the halls of the hotel and of course at Thursday night’s Noir at the Bar. Alas, that was the only time I got to see Patti Abbott and Dr Phil. Bouchercon was madness and I didn’t see half the people I thought I would but met lots of new folks too.

The Murder Under the Oaks reading and signing was absolutely amazing. We each had three minutes to read. I made a quick intro and read a lively part from ‘Life Just Bounces’ and it seemed to go over well. Then we signed more books than I have ever signed in my life (so far!). No complaints from me about that. Maybe editor Art Taylor’s golden touch will anoint this book as well: he picked up an Anthony for best short story that night.

Tomorrow: it’s out! Satan’s Sorority will be hitting the streets. You best watch out for those gals.

Among the vintage Bond titles where I’m house-sitting, I found this volume which I had actually forgotten about. Signet packaged it the same as Fleming’s originals so they make a nice set.

‘As a recently retired university teacher, I can’t help being slightly drawn by any form of writing that (like science fiction) reaches no part of its audience through compulsion. One volunteer is worth ten pressed men.’ Amis is a fan and it shows in his being most delightful and on his best behaviour throughout. 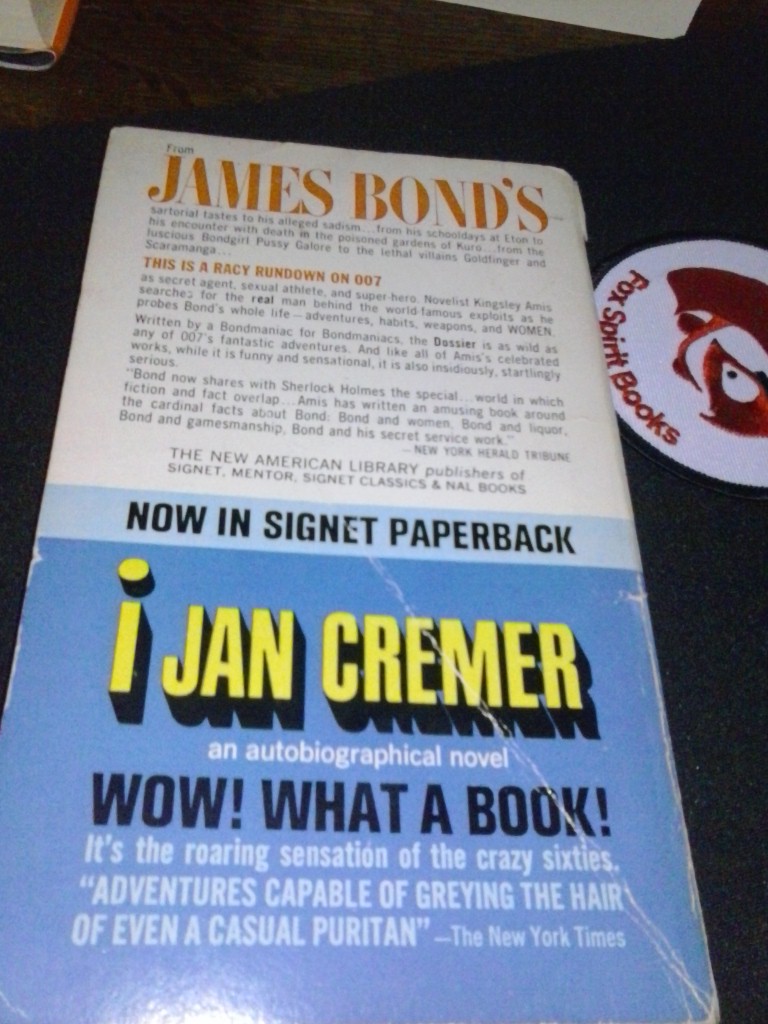 I love the implication of sexy revelations — including the advert for Jan Cremer’s ‘scandalous’ tell-all of his sexual escapades.

The ToC promises more of the same; Amis sneaks in some Spillane for the Appendix on Sadism.

Perhaps the best line in the book, which I like to quote ad infinitum, though I’d forgotten where I first got it, is ‘All literature is escapist.’

See all the overlooked books at Patti Abbott’s round-up.

The parson looked nervous. Bart smiled to reassure him, then nudged him along with the Berretta. Now it was his wedding day, he didn’t want to wait.
“Dearly beloved…” he paused.
“What now?”
“We need witnesses.” The man swallowed.
Bart shook his head. “God is my witness. Ain’t that right, Bonnie?”
The parson went on, his voice shaking. “Do you–“
“Bartholomew Jenkins Evans.”
“Take this woman–“
“Bonnie Louise Ormond.” He gave her a squeeze.
Happiest day: a few more words, “You may kiss the bride.”
He lifted her limp head by the bruised neck. Bliss.
☠

[Originally written when Patti Abbott made a challenge to her pals: a drabble — a story of exactly one hundred words —  inspired by one of three pictures.]